Enovos is installing numerous photovoltaic power plants in the country in response to a call for tenders issued by the State. In addition to the rooftop installations that we are all familiar with, other types of technologies are being developed in Luxembourg. Anouk Hilger, Head of Renewable Energies at Enovos Luxembourg, presents the various installations in the country for which the group is deploying different technologies.

The development and construction of photovoltaic power plants, which Enovos has been working on since 2019 in collaboration with a number of professional partners, is intended to contribute to increasing the share of renewable energies in Luxembourg’s electricity consumption. By 2030, the government aims for 25% of the energy consumed to come from renewable sources.

Enovos is striving to make rapid progress in the implementation of renewable energies and thus the energy transition. Its ambitions are becoming more and more concrete, thanks in particular to its expertise and the confidence of its partners and the excellent collaborations established over the last few years. Deployed over the last three years, Enovos currently has 30 MW of photovoltaic power plants in operation and 10 MW in planning in Luxembourg.

Further development of photovoltaics in the Grand Duchy is essential to advance the decarbonisation of the energy sector. 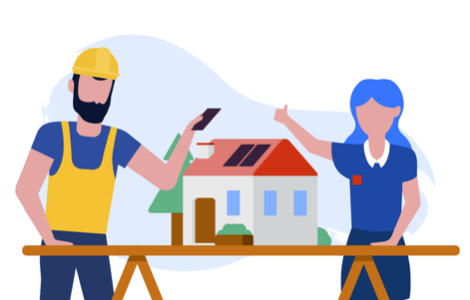 Your energy savings will be rewarded.

In addition to the rooftop installations that we are all familiar with, other types of technologies are being developed in Luxembourg, such as ground-mounted solar power plants, floating installations and solar carports for car parks, which came into being in 2021.

What is the difference between them and where can they be found in the country?

The larger the roofs, the greater the capacity to install, so the most popular buildings are primarily industrial buildings. Their surfaces are often unused and lend themselves perfectly to the installation of solar panels.

In order to allow for large-scale installations on the ground, suitable surfaces must be identified. Between agriculture, environmental protection and energy production, the Grand Duchy must enhance its spaces and make the best use of its land.

For example, on the RTL Group’s transmission sites in Junglinster and Beidweiler, whose industrial land cannot be used for urban development or transformed into agricultural land, some 29,000 panels have been installed, producing almost 10.5 GWh per year, which is equivalent to the consumption of more than 11,000 people.

killing two birds with one stone

In collaboration with the Administration of Nature and Forests, this project has become an eco-pasture, where sheep are used to maintain the land and at the same time promote the development of biodiversity. It is therefore a dual use for the same area and this project shows the complementarity between biodiversity management activities and the production of energy from renewable sources.

The carports also have a dual use, as the photovoltaic systems are also used to shade the parking spaces below.

The first ones to be installed by Enovos are in Colmar Berg at Goodyear.

The principle is the same for our carport and floating installation projects: it’s about giving a dual use to surfaces already used for other purposes.

At ArcelorMittal in Differdange, the photovoltaic panels have been installed in the industrial pond. The development of the project started in 2018, to be commissioned in October 2021. On the one hand, the panels will float on the water cooling pond, and on the other hand, it will be used to produce energy.

In total, 25,000 m² of solar panels with their floating structure are installed on one of the industrial ponds on the Differdange site. This pond, with a surface area of 60,000 m², was no longer used for cooling industrial installations and was the perfect candidate for a first innovative project of this type. It is a 3.05 MW photovoltaic power plant which will supply the equivalent of 800 homes with electricity.

Watch a video about the project

In total, more than 13 million tonnes of CO2 have been avoided. This corresponds to the energy needed by 7,425 households or the planting of more than one million trees.

In order to accelerate the energy transition, every kWh generated counts. It should be emphasised that both the decentralised production of a small photovoltaic installation on the roof of a private individual and the production of a large installation on the ground, on a roof, in a car park carport or in floating mode will be needed to achieve carbon neutrality by 2050.

We are working hard to develop new concepts that emphasise the value of space and allow for multiple uses between biodiversity, farming, industrial activities and the production of energy from renewable sources.

Making space available for the production of renewable energy is nowadays a necessity and also a real opportunity.

Companies have the choice of either renting their surfaces, such as roofs, land, car parks or ponds, to the energy company, which will take charge of the entire installation of the photovoltaic power plant: development, engineering, financing, construction, maintenance and operation, as well as the resale of the production for at least 20 years; or they can co-invest, relying on the expertise of Enovos for the management of the entire solar project.

The electricity produced is usually fed into the public grid and paid for on the basis of a feed-in tariff.

In addition, Power Purchase Agreement (PPA) solutions based on green energy are being implemented. PPAs involve a company directly purchasing electricity generated by solar, wind or other renewable sources. Contracting can be linked to existing assets or assets yet to be built and can be carried out over the medium or long term.

These approaches allow businesses to participate concretely in the development of renewable energies and to promote their commitment to achieving their CSR objectives.

In 2019, Enovos developed photovoltaic installations for a total of 14 MW.

During 2020 and 2021, an additional capacity of 16 MW was commissioned. 5 projects with a total capacity of 10 MW are being planned for grid connection in 2022.

Philippe Hennes, Corporate Banking – Team Manager, explains: “The climate is at the heart of the bank’s ESG strategy, which is why Spuerkeess has always pursued a policy of promoting sustainable and renewable forms of energy, both inside and outside the bank. In October 2019, Spuerkeess became the first bank in the Luxembourg financial centre to sign up to the “United Nations Principles for Responsible Banking”. In this document, we pledge to make our contribution to meeting the UN’s sustainable development goals and those of the Paris Climate Agreement.”

He added: “We are very proud in our Corporate Banking department to be able to advise and support our clients in the development of their projects in the energy transition sector.”

Ashanti’S, making beauty accessible for everyone!

Driven by her desire to "make beauty accessible for everyone", Susana Costa created a personalised treatment and wellness programme provided in…

From finance to financiers

Driven by his passion for baking and his entrepreneurial drive, Simon decided to leave his finance job and start a baking business by creating an inclusive…

The future is hats

Born in Spain, Sylvia arrived in the Greater Region in 2007. Having worked in a bank for 21 years, she decided to make a living from her passion, which is the…

A VEGAN twist on traditional dishes

Ten years ago, Linda and Benoît Depaye decided to adopt a 100% vegan lifestyle. This decision led them to open their own restaurant where they put a vegan…

The tricky path to becoming an entrepreneur

Of Indian origin, Supriya Sodhi arrived in Luxembourg in 2016. Although she holds two higher education degrees, she chose to follow her heart. Her great love…

Of Chinese origin and British nationality, Mei Chan has been immersed in Japanese culture thanks to her many travels but also because of her passion for this…

After immigrating to Luxembourg at the age of six with her parents, Charlotte Reuter's studies focused on literature and philosophy. Later, after a few…

After an extensive human resources experience in the field of finance, Chaffa Zaroui chose to shift her focus to the world of entrepreneurship and launch her…

Focus on the country’s large-scale photovoltaic…

Enovos is installing numerous photovoltaic power plants in the country in response to a call for tenders issued by the State. In addition to the rooftop…

After a burnout, Marc Plata undertook a training course in sophrology which, in the end, led him to the world of entrepreneurship two years later. What were…

madi&co – the digital marketing agency for…

After ten years with an advertiser, Marie-Caroline Dumas decided to create her own digital marketing and communication agency and thus became an entrepreneur.…

With "Energy Contracting", LuxEnergie offers tailor-made, turnkey energy solutions that include not only the construction and financing of energy…

All articles
Branches
Find a branch
Spuerkeess Direct
Monday to Friday 7:00 am to 7:00 pm
Modal